The first competition is to be hosted by University of Manchester on 5th December 2012.
Have fun, girls!

This week saw the final assessment for team formation in our BUCS leagues. They are as follows:

Congratulations to those chosen for teams!
It proved extemely difficult this year due to having so many members join this year and the general standard of riding being the highest we've ever known.
We hope that nobody is disappointed with the outcome and our teams this year will be more successful than ever.


Dates of each competition will be decided once all universities have recruited for their
teams.

UCLan will be assessing members during riding lessons in october. Any new members should express interest in teams to the current A- and B-Team captains, Rachael and Lauren.

During this period a C-Team of reserves will also be chosen, and hope to compete later this academic year. 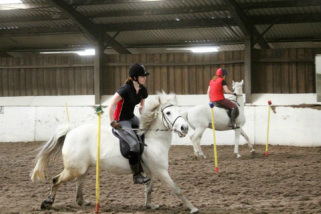 Lauren, riding Poppy
Our second gymkhana of the year was a huge success and the best so far! After rediculous amounts of laughter, cheering and shouting, everyone had a fantastic time.

Congratulations to those who won their classes!

The end of the year is now upon us and the gymkhana signified the last riding session for the current year.

We'd like to thank all who have participated throughout the year and made it one to remember. Good luck to everyone in exams. Have a good summer (with lots of riding,  hopefully!)

SEE YOU ALL IN SEPTEMBER FOR THE SPORTS FAIR

As planned, at the end of academic year AGM was the formation of a new committee to operate in the management of the club in the coming academic year. Positions were allocated by self-nomination and election.
The 2012-13 Team UCLan Committee is as follows:

B-Team Gets the Blues

Congratulations are in order after B-Team achieve second place away at Manchester Metropolitan University. Competition with MMU, Manchester and Leeds was very tough, and after four hard rounds our girls battled until the end. Their hard work paid off as Team UCLan members waere awarded blue rosettes.

Well done girls and keep up the hard work! 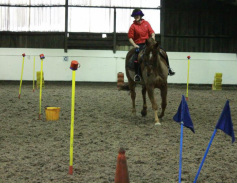 Chair Steph Sandland riding Apollo
In keeping wth tradition, UCLan Equestrian Club held its annual Christmas Gymkhana this week. With inordinate amounts of laughter, cheers and determination - not to mention two cheeky tumbles, a fantastic time was had by all.
Congratulations to those who won.  We can't wait for end of year Gymkhana!

Drama as B-Team Captain is Injured

Amanda Snelling, B-Team Captain 2011-2012, suffered a fall from 15.2hh Welsh Section D, Jenson after a battle of wills. Unfortunately, after hitting the ground, Amanda was unable to move without excruciating pain and an ambulence was called.  Following medical investigation it was discovered that Amanda had broken her humerus - ironic - and had to undergo surgery to pin the bone back into place before having to have a cast for 6 weeks.  Of course, this means that Amanda cannot ride.
"I am devastated that I can't compete alongside the other B-Team members," says Amanda, "but I'm still able to stand at the sidelines and give moral support."  Jeannie Mott-Philip is to be Amanda's replacement team member.
We wish Amanda a speedy recovery.

The Eagerly Anticipated Announcement of Teams

Good luck to all involved. Secure those red rosettes, girls!

This year, UCLan Equestrian Club has attracted a record number of members, making the club the biggest it has ever been.
The club is enjoying a good relationship with its base, Earnsdale Farm Riding School and with the acquisition of promising new riders, anticipates the upcoming excitement of team formation and competitions in conjunction with BUCS. 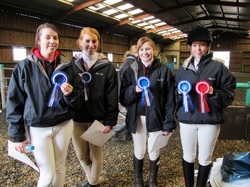 Competing against Manchester and Keele went very smoothly considering the last minute changes of horses. With the weather staying dry, the B team coming second and Emma Pilkington placed individual first we all had a good day, so well done girls. Hope we can make it first next year!

B.U.C.S have now revealed who we are competing against this year.